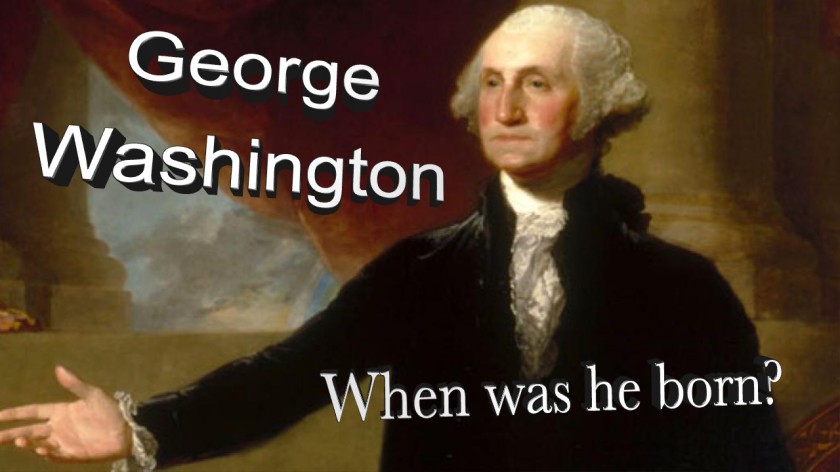 Been looking at some interesting history. Generally I stay away from this as there is too much debate with one person saying one thing and another person saying another, and there is nothing to firmly base ones opinion upon. That is why I made the video Calendar of the scriptures. It is a solid base to start from.

So now I have that base I was looking at George Washington’s birthday on Wikipedia. The very first sentence caught my eye.

So what is this “old style” date?

Old Style (O.S.) and New Style (N.S.) are sometimes used with dates to indicate whether the Julian year has been adjusted to start on 1 January (N.S.), even though documents written at the time use a different start of year (O.S.), or whether a date conforms to the Julian calendar (O.S.), formerly in use in many countries, rather than the Gregorian (N.S.).

For a period of 170 years (1582–1752) both dating systems were in concurrent use in different parts of Western Europe and its colonies. During this period the difference between the styles increased from ten to thirteen days due to the Julian calendar’s excess of leap years. The switch to the Gregorian calendar for secular use occurred in Eastern Orthodox countries as late as the 20th century, and some religious groups in some of these countries still use the Julian calendar for ecclesiastical purposes.

So who instituted this change?

Catholic countries such as Italy, Poland, Spain, and Portugal were first to change to the Gregorian calendar. Thursday, 4 October 1582 was followed by Friday, 15 October 1582, with ten days “missing”. Countries that did not change until the 18th century had by then observed an additional leap year, necessitating eleven “missing days”. Some countries did not change until the 19th or 20th century, necessitating one or two more “missing days”. – https://en.wikipedia.org/wiki/Old_Style_and_New_Style_dates

What did these countries change from? Here is something many do not know:

Japan, Korea, and China started using the Gregorian calendar on 1 January 1873, 1896, and 1912, respectively. They had used lunisolar calendars previously. None of them used the Julian calendar; ….. – https://en.wikipedia.org/wiki/Adoption_of_the_Gregorian_calendar

This is what one finds in scripture. A luni-solar calendar does not use a man made dateline. Rather it uses the new moon to start each month.

A 7-day cyclic calendar does not work with the sun moon and stars. The point in time where they both start is separate. If we were to look at how the day was structured going around the globe before the change from a lui-solar calendar, it would have looked something like this (Click on the image to see in larger format).

In the eighteenth century, Britain and its colonies were quite literally behind in the times, still using the Julian rather than the Gregorian system, even though most of the Protestant nations in Europe had already fallen in line with the Catholic reckoning of dates. – from Marking time –  hence George Washinton’s Birthday.

The matter is so simple, but it is also very confusing for some. When one learns one way of doing something and then discovers they are wrong, they will either continue to do it in the wrong way and be dishonest with themselves or they will change.

Which way shall you go?