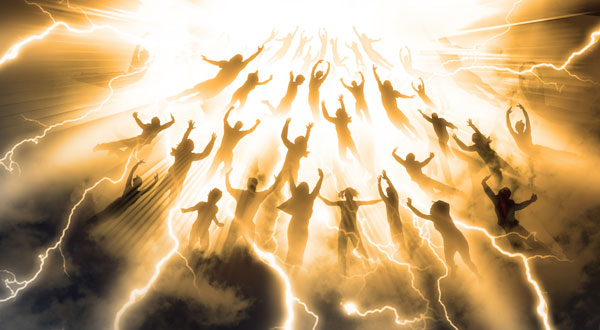 2 Timothy 3:12
12 And indeed, all those wanting to live reverently in Yahushua haMaschiach, shall be persecuted.

James 1:12
12 Baruk (blessed) is the man who endures trial, for when he has been proved, he shall receive the crown of hai (life) which the Master has promised to those who love Him.

James 5:10
“My brothers, as an example of suffering and patience, take the nebi’im (prophets), who spoke in the name of Yahuwah.”

What of the idea of the rapture, where it is believed the believers will allegedly be removed from the earth before the final time of trouble soon to come? Is there any actual Scriptural proof for this belief? If not, what is its purpose?

The rapture doctrine claims that the Maschiach will “secretly return” just before or at the beginning of the tribulation and secretly whisk away certain of the “saints” to heaven with Him, “to keep them from the time of temptation that shall come upon all the world,” and then He is said to come again at the end of the of tribulation for those left behind who would have repented during the time of tribulation, at which time He is said to come openly…

The rapture belief rests heavily on this text:

We believe the Bible is its own interpreter, so using Scripture to explain Scripture we shall now decipher the true meaning of this text. Other questions which need answering is if the Bible actually ever says there is ever going to be a secret, silent rapture? We shall see this unravelled momentarily…

AS IN THE DAYS OF NOAH

Recorded in the Book of Matthew, are Yahushua’s own words that reveal what will happen when He returns:

Matthew 24:30-31
“And then shall appear the sign of the Son of man in heaven: and then shall all the tribes of the earth mourn, and they shall see the Son of man coming in the clouds of heaven with power and great glory. And he shall send his angels with a great sound of a trumpet, and they shall gather together his elect from the four winds, from one end of heaven to the other.”

Here we see that when Yahushua returns, the final trumpet will sound and He will gather His elect from one end of the heavens to another. Continuing with verses 37-39, this passage of Scriptures reveals who are “TAKEN AWAY!”

So who were “TAKEN AWAY?”

Notice that the final events will be just like those in the days of Noah… And what happened with righteous Noah and His family? Were they raptured from the planet just before the devastating flood? NO! On the contrary, they remained ON EARTH for the duration of the deluge. Yahuwah had guided Noah to prepare a place of safety and protection – giant ark floating on the flood waters.

Now, notice again what happened to the wicked. We read that Yahuwah “TOOK THEM ALL AWAY!” They were “taken” and destroyed in the waters and only Noah and His family remained. Yahushua said it will be in the same manner at the end of the age:

In the same manner as in the days of the flood, at Yahushua’s coming, the wicked will be“TAKEN AWAY“ first and the righteous will remain (alive) to be translated at the twinkling of an eye so they can meet with their Redeemer in the sky. To clarify this even further, the disciples asked Him where these that are “TAKEN AWAY” (meaning the wicked), will go? For the astounding answer, we go to a parallel account in the Book of Luke, where Yahushua responded:

And they answered and said unto him, Where, Master? And he said unto them, Wheresoever the body is, thither will the eagles be gathered together.“

Does this sound like a paradise place of safety where the “saints” will be taken up in a secret rapture? Not in the least. On the contrary, Yahushua told His Disciples that those “TAKEN“ (meaning the wicked), will be DESTROYED, not whisked off to safety in heaven!

In His parable of the wheat and tares in Matthew 13, Yahushua corroborates what we have confirmed in Matthew 24, that the rapture is the exact opposite of what the Scriptures say will happen:

Matthew 13:30-50
“…Gather ye together first the tares, and bind them in bundles to burn them: but gather the wheat into my barn…”

“…As therefore the tares are gathered and burned in the fire; so shall it be in the end of this world. The Son of man shall send forth his angels, and they shall gather out of his kingdom all things that offend, and them which do iniquity; And shall cast them into a furnace of fire: there shall be wailing and gnashing of teeth….”

“…So shall it be at the end of the world: the angels shall come forth, and sever the wicked from among the just, and shall cast them into the furnace of fire: there shall be wailing and gnashing of teeth.”

“I WILL KEEP YOU FROM THE HOUR OF TRIAL…”

Then there are some who sincerely believe the following Scripture says there shall be a Rapture before the coming time of trouble (which is the time of the 7 Trumpets):-

“Since you have kept my command to endure patiently, I will also keep you from the hour of trial that is going to come on the whole world to test the inhabitants of the earth.” (Rev 3:10)

However, this would mean such persons have inadvertently disavowed themselves from the following promises, which are made in the context of the coming time of trouble (the 7 Trumpets):-

Telihim/Psalm 91:1-16
Whoever dwells in the shelter of the Most High will rest in the shadow of the Almighty. I will say of Yahuwah, He is my refuge and my fortress: my Eloah; in him will I trust.

Surely He will save you from the fowler’s snare and from the deadly pestilence. With his feathers he will cover you, under his wings you will find safety. His truth is your shield and armor. You will not fear the terror of night, nor the arrow that flies by day. A thousand shall fall at thy side, and ten thousand at thy right hand; but it shall not come near you. You will only observe with your eyes and see the punishment of the wicked, because you have made Yahuwah, which is my refuge, even the most High, your habitation; no evil shall befall thee, neither shall any plague come near your dwelling.

For he shall give his angels charge over thee, to keep you in all your ways. They will bear you up in their hands, That you do not strike your foot against a stone. You will tread on the lion and the adder; the young lion and the serpent you will trample underfoot, because he has set his love upon me, therefore will I deliver him: I will set him on high, because he hath known My Name. With eternal life will I satisfy him, and show him my salvation.

He was being specific here, because during the blowing of the 6th Trumpet, there is something that shall occur within exactly ONE HOUR!

Revelation 9:13-21
The sixth angel sounded his trumpet, and I heard a voice coming from the four horns of the golden altar that is before Elohiym.

It said to the sixth angel who had the trumpet, “Release the four angels who are bound at the great river Euphrates.” And the four angels who had been kept ready for THIS VERY HOUR and day and month and year were released to kill a third of mankind.

The number of the mounted troops was twice ten thousand times ten thousand. I heard their number. The horses and riders I saw in my vision looked like this: Their breastplates were fiery red, dark blue, and yellow as sulfur. The heads of the horses resembled the heads of lions, and out of their mouths came fire, smoke and sulfur. A third of mankind was killed by the three plagues of fire, smoke and sulfur that came out of their mouths. The power of the horses was in their mouths and in their tails; for their tails were like snakes, having heads with which they inflict injury.

The rest of mankind who were not killed by these plagues still did not repent of the work of their hands; they did not stop worshiping demons, and idols of gold, silver, bronze, stone and wood—idols that cannot see or hear or walk. Nor did they repent of their murders, their magic arts, their sexual immorality or their thefts.